Hello! I'm here today to present some clarity for those still interested in editing, modifying, or just getting the Japanese soundtrack from the Sonic CD port found in Sonic Gems Collection, regardless of the platform you're playing it on or the region in which you reside!

Do keep in mind that is only for modified consoles, though.

This version is region-specific due to the smaller capacity of the GC Optical Disc. Though every region received unique content, the European and US versions are almost nearly identical, and both contain the American Sonic CD soundtrack only.


Finding the Japanese version of this would certainly be your best choice as there's no software modding necessary and you get additional Genesis roms thrown in that were removed from releases overseas.

If, however, you'd like to choose a western version as your basis...

To anyone familiar with the PC version of Sonic CD, you wouldn't be too surprised at what you see!

There's many .BMP files that are immediately editable, including the copyright banner from the title screen!

Interested in changing the soundtrack? That's where the excellent AFS-ADX tools can help! Extract both the tools and "BGM_US.AFS" from soniccdu.iso into the same directory.

From there, open Command Prompt and locate your directory.
1.) Use afs_extract.exe to extract BGM_US.AFS.
--->This should decompress the AFS and extract it's ADX files that make up the soundtrack.
2.) Use wav2adx.exe to convert the music of your choice into .ADX format, rename the files accordingly!
--->There are several converters available for formats like MP3, WAV, AAC, etc.
3.) Use afslnk.exe to compress the new ADX files into an AFS file again.

You could also take it a step further and try to change the stock SFD videos! Provided you can find a tool that can convert between the two, Sonic Boom could be replaced by it's JP/EU equivalent or even some extreme bear wrestling video, and any and everything in-between!

With the use of GC ISO Rebuilder, you should be able to extensively modify the game to pack for re-injection into Sonic Gems. The most important thing to recognize while doing sensitive modifications like these to an image that's already been burned is to be cautious in your editing. There's several factors that should be considered (such as file size, possible additional padding in said files) to ensure that it will keep booting.

Also keep in mind that these tools work for several aspects of the game outside Sonic CD. Take a look at the files, and you'll see what I mean!

Compared to Gamecube, the PS2 version of Sonic Gems Collection is interesting. They chose to release the game with all of it's different regional data on one DVD! It loads this regional data by determining what language the console is outputting on the screen. When English is detected, the American soundtrack is loaded. When Japanese is detected, the Japanese/Euro soundtrack is loaded.

This particular version wasn't released in the United States because Nintendo had wanted Gems to stay a Gamecube exclusive, so that brings you down to a European and Japanese release.

Fortunately, whether you don't have a Japanese PS2 or live in the United States and still want to hear the JP soundtrack, there's a way!

Open the ISO in a Hex Editor and search for the text string "BGM_US". Note that it should come up two times as shown below. The first of these two results is simply part of a directory list that references various game files but I changed it anyway.

The second find of these results show how part of the game's code is being loaded. This is the one that you're looking for! The pictures shown below are sampled from an already edited ISO. 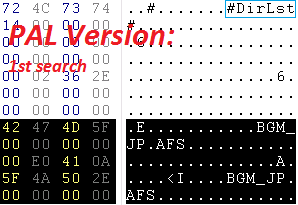 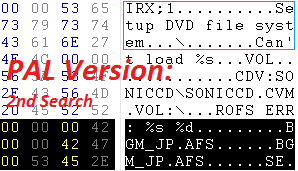 This mod can be slightly trickier to test out, but the Japanese version is truly the most recommended to use as a basis for your mods. It's the additional games and NTSC compatibility that won me over, at least!

Once again, search for "BGM_US". It shows up as a directory list first and a loaded file second. What I recommend doing for this one is switching the "US/JP" tags on both like so:

I simply switched the tags because I was testing with PCSX2 and it loaded the game in it's native Japanese. It originally played the Japanese soundtrack, but after the switch, it began to play the American soundtrack. I For once, it was music to my ears! I then proceeded to install it on my SCPH-30001R PS2's HDD, and it played the right soundtrack!

I highly recommend that you test any edited files in an emulator before running them on real hardware (just to save yourself some time and a headache).

Good luck to anyone insterested! If it's too much effort, then I'd only recommend the PSN/XBLA version of the game that was released a few months ago!